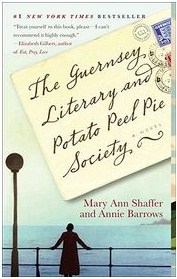 I don’t have enough time to do this book justice, but since that won’t change anytime soon, I’ll just have to share it with y’all in the small space I do have today.

The Guernsey Literary and Potato Peel Pie Society is one of those books that I kept seeing everywhere, and every time I saw it, its title leapt out at me and pestered me with its originality until I finally took the book home out of sheer annoyance.

Result #2 on Pixabay for “annoy”. Tyrolean cows will have none of your nonsense.

But when I opened it up and began to read, my impatience vanished in an instant. TGLAPPPS is a charming, funny, poignant epistolary novel, a genre I’d never encountered before. The authors, Mary Ann Shaffer and Annie Barrows, switch narrators often enough to stave off monotony, and in any case, every single narrator is so vivid, so fresh, and so engaging that it’s a delight to listening to whoever’s speaking at the moment.

The story opens in London in 1946, where 33-year-old Juliet Ashton is enjoying modest fame as a new writer in the first days of rebuilding after the war. One day she receives a letter from a man she’s never met, on an island she’s never visited — Guernsey, one of the British-held Channel Islands between Britain and France. The man’s letter is short and professional, asking for Juliet’s help in locating a book, but Juliet is intrigued by the small details he’s revealed about life on Guernsey, which the Germans had occupied during the war. Her correspondence blossoms into a network of acquaintances on the island, until finally Juliet realizes that she must visit Guernsey and meet these people for herself. What she finds there might very well change her life.

Rich with historical detail, TGLAPPPS unfurls its plot in a setting rarely visited. If you’re looking for high-quality historical fiction, light reading for the train, your next book club pick, or just an all-around great story, TGLAPPPS is the book to choose.

Follow The Yodeling Shadow on WordPress.com
Join 104 other subscribers